Cost-Competitive CCS from Day One

Posted by Luke Warren on Wednesday, 15 February 2017 in General

What is the difference between value and cost? When a technology like CCS is indispensable to the UK economy (high-value), what role does the cost play?

The UK Government published its Industrial Strategy Green Paper a few weeks ago, emphasising the need to reduce the cost of energy and decarbonisation in the power and industrial sectors. There is overwhelming evidence showing that CCS is one of the most valuable solutions to achieving this goal – for example the Committee on Climate Change has concluded that CCS has the potential to halve the cost of meeting the UK’s 2050 climate change target.

However, to realise the tremendous value of CCS, we need to tackle the perception that CCS is high-cost.

Posted by Judith Shapiro on Tuesday, 27 September 2016 in General 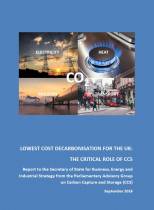 During the summer holidays, whilst Parliament was in recess, things have actually been quite busy in the world of CCS.

On the 8th September, the CCSA hosted a CCS Knowledge Transfer Workshop – to allow CCS project developers to engage with representatives of the two projects in the cancelled CCS Competition. The workshop was framed around the 90 Key Knowledge Deliverables (KKD’s) from the Competition projects – a requirement under the terms of the competition – which have now been published in full on the UK Government website. Together with our Lessons Learned report, which we blogged about in July, we should now have a good understanding of how to move forward with CCS projects and what to avoid.

Speaking of moving forward, let’s draw a line under the Competition and look to the future. We need a simple CCS story that answers three basic questions; Why CCS? Why UK? And Why Now?

Time to Break the Chain

Posted by Judith Shapiro on Thursday, 07 July 2016 in General 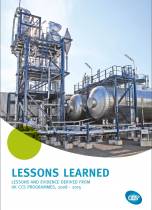 Since the Spending Review decision to cancel the CCS Competition, the UK Government and industry have been working hard behind the scenes to think about a new approach for CCS. Then Brexit happened. Whatever else one might surmise about the impact of this result, one thing is certain – there is likely to be a long period of upheaval and uncertainty as the UK attempts to unhinge itself from Brussels.

In some ways, this actually presents an opportunity to reinforce and reposition climate change arguments and the importance of CCS. There are positive signs that the UK is not backing down on its commitments – only last week (30th June), the Government announced that the UK will legislate for a 57% emissions reductions target for the fifth carbon budget (covering the period 2028-2032) in line with the advice of the Committee on Climate Change.

Political turmoil or not, the UK remains a signatory to the Paris Agreement and the goal of limiting the global temperature increase to well below 2°C. Meeting this goal will require serious action from all countries around the world and the UK must play its part. On the 29th June, the CCSA held an important joint workshop with the Carbon Sequestration Leadership Forum (CSLF) on “CCS Post-Paris: Realising Global Ambitions”. At this workshop, one presenter pointed to the importance of CCS in enabling countries to have “options” available by which the aim of the Paris Agreement can be met. The point was made that because CCS is essential to decarbonising industrial sectors (such as steel, cement, refining etc) as well as power, has a role to play in decarbonising heat and is the best option for producing zero-carbon hydrogen as a fuel – countries will find it exceedingly difficult to meet the Paris Agreement if CCS is not available. Furthermore, the contribution that bioenergy with CCS (bioCCS or BECCS) could make is enormous as it actually enables emissions to be removed from the atmosphere. Imagine the massive benefit this could have, particularly in terms of offsetting hard-to-decarbonise sectors such as aviation.

The big question we are now faced with in the UK (aside from the Brexit fallout of course!) is: how to get CCS on track?

Two sides of the CCS coin

Posted by Judith Shapiro on Thursday, 10 September 2015 in General

Whilst it is obviously great that CCS is gaining increasing attention in the media, we need to look at the messages that these articles leave behind.